The Fight to Use Food Stamps 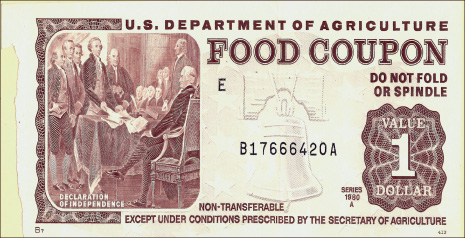 I noticed the articles I have been avoiding sitting on my desk. Okay, maybe not entirely avoiding. I had shared them with my circle of support and my students, which prompted some great discussions. You see the articles all deal with SNAP (Supplemental Nutrient Assistance Program) – better known as food stamps. Food stamps are often a necessary steppingstone for many families, helping about 40 million low-income Americans, including one in every four children in the country. Paper food stamps are long gone, replaced beginning nearly two decades ago by debit-style cards, called Electronic Benefit Transfer cards (EBT). The program is federally funded and administered by the states, which typically rely on private contractors to provide the service. My issue in short is how they are now being utilized (or not utilized). One article Food-assistance payments can be used for grocery delivery in Seattle area as part of test boasted that Amazon would now be allowing welfare participants to partake in Amazon Fresh. This is great if you live in a food desert or are disabled or elderly. I found myself with lots of questions on how this pilot program will work. I will spare you my questions and say if you’re interested you can go to the Amazon SNAP EBT FAQ’s page.

Another article titled The Fight to Use Food Stamps for Restaurant Food started off with “She tried to use her benefits card to buy the salmon lunch special at a Ralph’s supermarket, but she was refused. ‘They told me that they could only sell me raw fish. They couldn’t sell me anything that had been cooked or prepared. It was against the law’,” It annoys me that more states have not implemented the Restaurant Meals Program (RMP), an obscure provision in the federal Food Stamp Act that lets food assistance programs allow SNAP recipients to buy prepared foods from restaurants and supermarkets. The bill allows people over the age of 60, and people living with disabilities or experiencing homelessness, to buy prepared meals using their EBT cards. I am aware that the biggest issue with this law is the authorized restaurants include fast food chains such as Subway, Burger King, Domino’s Pizza, and Jack-in-the-Box. I agree most of these are not healthiest restaurants, but it is not up to the state or government to be the food police.

The final article This Start-Up Says It Wants to Fight Poverty. A Food Stamp Giant Is Blocking It. focuses on Propel, an “anti-poverty software company.” In 2016, the Brooklyn start-up released a smartphone app that lets food stamp recipients easily look up how much money is left in their accounts, rather than call an 800 number or keep paper receipts. Propel has added features like links such as food coupons, healthy recipes, exercise tips, budgeting tools, and job opportunities. Most would see this as positive move forward. Sadly, Conduent (a big government contractor that runs the food stamp networks in 25 states) maintains the database that Propel’s app uses to let people check their accounts. Propel has tried to explain its business to state governments and to food stamp contractors. Its app is a digital “skin” that works on top of the websites of food stamp contractors, like Conduent, allowing them to check their balance and access other budget friendly and healthy lifestyle options. Unfortunately, Conduent did not approve and has begun competing with the start-up while offering none of the above services that Propel offers. I can only see this as a case of greed and the government trying to hold the poor back. What Propel is doing in the low-income market is broadly similar to what other companies like Mint have done- offering digital services that let people organize and manage their personal finances. My takeaway from all three of these articles is it should be up to the participants in the program to decide how to organize and use their benefits.